As promised earlier in the week I said I’d share some of my crafting activities for Molly Moo Cat.

I was taught how to make pom poms by my mum when I very little but not until fairly recently that they came back into fashion. I’ve seen little plastic tools in shops you can buy now to make them but I’ve never tried them.
The traditional method is to get some plain flat card such as the back of a cereral box. Cut in half to make double the thickness. Place on a flat surface and draw around something round such as a wine glass or bowl cut a circular shape. This will be the size of your pom pom. Place a smaller circle such as an egg cup in the centre and draw around. Cut out the two rings of cards. This is your base.
Grab a ball of wool and cut into long strips. I use the wool that is made up of rainbow colours so you get a mix of colours. Tie a piece of wool around the each or the ring and then loop the wool through the centre and around the outside and then repeat over and over. The aim is to cover the rings with wool until there is no more room in the centre circle. Keeping the wool in strips means you can squeeze the residual wool through the centre hole. 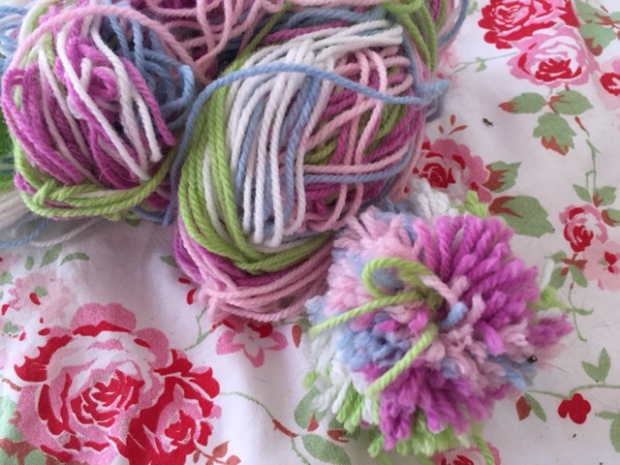 Once it’s full up grab some scissors and cut around the edge of the card pushing the scissors between the two rings. Do it carefully and keep the card together. Grab an extra piece of wool and wrap it around the card between the two pieces where you just cut and tie in a tight knot. Therefore, you have tied all the pieces together. You can now remove the cards and fluff up the pom pom into a nice round shape. Use some scissors to cut off any extra fluffy bits and make the pom pom really round.
Now technically pom poms made of wool are not meant for cats so you really shouldn’t let them eat the wool but my cat loves to play with them and push them around. It’s a good tip to leave the last wrap around piece really long as you can dangle the pom pom from their scratching post or any other fun spot.
Repeat until you have a house full of pom poms and a happy cat…

View all posts by melmosparkly

One thought on “Pom Poms for Molly Moo Cat”